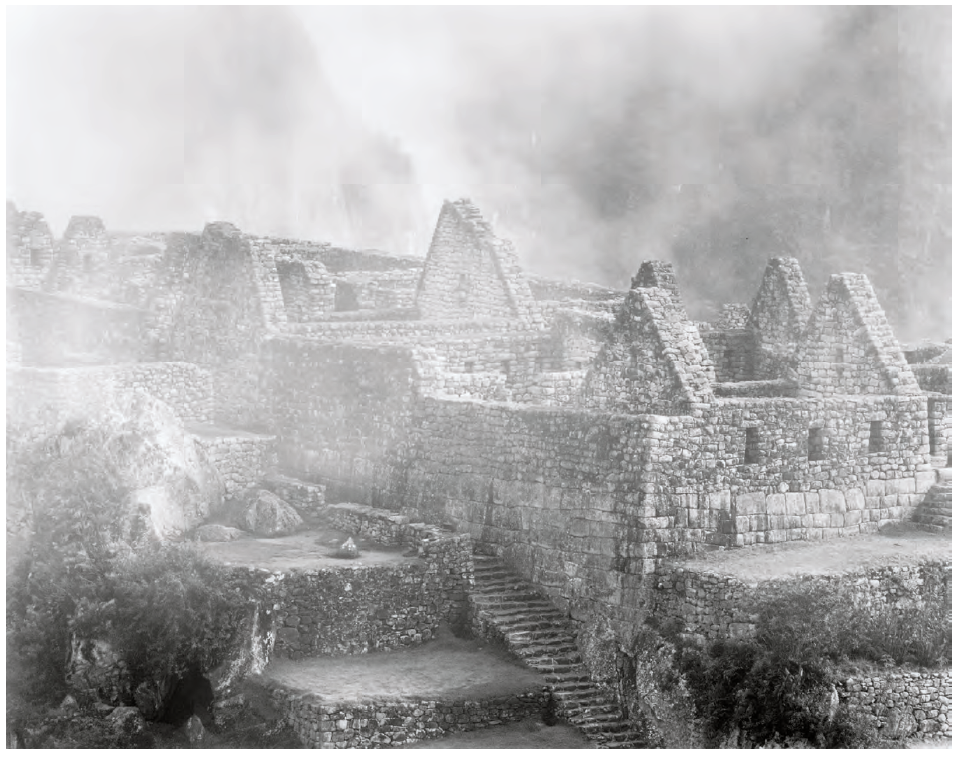 This article is an excerpt from The Essence of Photography by Bruce Barnbaum.

In the mid-1900s, the great street photographer Arthur Fellig, known as “Weegee,” developed a camera with an extended lens, which was actually a tube with a mirror in it set at a 45-degree angle. This allowed him to photograph a scene that was 90 degrees to his right, even though he was pointing his lens straight ahead. He would show up at crime scenes or auto accidents, and while it looked as though he was aiming his camera at the carnage in front of him, he was actually photographing the onlookers viewing the scene, who often revealed a variety of reactions from revulsion to outright glee. Fellig showed that such incidents were almost carnival-like in many ways, providing real entertainment for the gawkers. It was tremendously insightful, creative work. But it could only have been done by someone who first noticed the various reactions from onlookers at such events. Once again, keen observation and deep insight were key to his imagery.

I had never been to Peru or Machu Picchu when I was first invited to teach a workshop there in 2009. So I initially asked, “When is the wet season, and when is the dry season?” Then I said, “I want to time the workshop for the transition period between the two.” I knew in advance that I didn’t want to be there when it was pouring rain all the time (making it tough to even take my camera out), nor did I want to be there when there wasn’t a cloud in the sky (when all the postcard pictures are made). I wanted to be there when conditions were in flux. I felt that would be the perfect time for some good photographic opportunities (figures 5–1 and 5–2). Observation and experience give you insights, and then you can let your intuition and creativity take over.

Like so many of us, I had seen many photographs of Machu Picchu before I went there. So I knew what I was about to see; that is, until I walked through the entry gate. The scene in front of me was so utterly different from any photographs I had ever seen that I was astounded. I felt like I had never seen a photograph of the place. It was magical. The mountainous, tropical-jungle setting overwhelmed the extensive Inca ruins set atop a nearly knife-edge ridge. The surrounding mountains would disappear before my eyes and then become visible again as clouds and fog moved through the area, sometimes sweeping upward from the deep canyon below, and other times cascading downward from the higher mountains that seemed to go on forever. It took several years of photographing there, for just a few days each year, for me to be able to fully take advantage of the rapidly changing atmospheric conditions. Eventually I put together a small set of images that most closely parallels my basic thoughts about Machu Picchu: that Machu Picchu doesn’t actually exist; it’s but an evanescent dream. 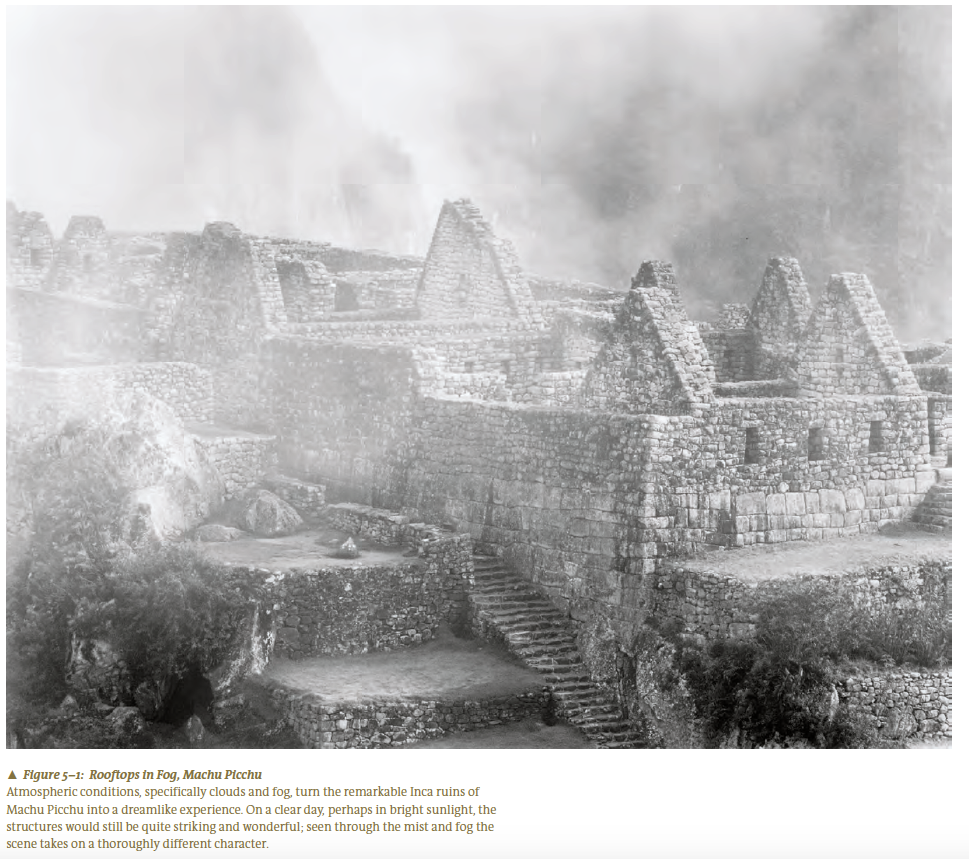 My initial questions about the timing of the wet and dry seasons, and my desire to work in the transition period between the two, were based on my experience with weather conditions that could be beneficial for good outdoor photography. Over time, such experience becomes so deeply entrenched in you that you really don’t even think about it. You just go for it. It didn’t take me a nanosecond to think of asking those questions; they were simply there. The transition period was the obvious time to go. Observation and experience over time led to intuition.

Similarly, although I have written about looking at lines, shapes, contrasts, and all the other compositional elements of a photograph, it turns out that when I’m setting up the camera, some of those concerns may be on my mind, but it’s more likely that none of them are. Most of the time a composition simply “feels right.” It can’t be any other way. My guess is that I’ve internalized my reactions so completely that little of it is conscious thought; it has become part of my subconscious procedure. It’s basically intuitive, not cerebral.

Perhaps later I can explain why I did what I did—why I set up the camera in exactly that location, why I chose a specific focal length, why I framed the image exactly the way I did, and all the other things that went into the exposure. But I know with certainty that I was actively thinking about and was aware of the light on the scene. I was aware of how light affected the scene, and if there was anything that needed to be (or could be) altered to improve the light.

I suspect that Ansel Adams didn’t give much compositional thought to Moonrise, Hernandez, New Mexico while setting it up. In fact, he wrote that he was working as fast as he could before the sun set, and after making the exposure, he went to turn his negative carrier around for a second exposure, but the sun set before he could do so. For Ansel, the composition simply felt right and he rushed to capture it. I doubt that Beethoven spent much time thinking “what comes after Da Da Da Dummm?” It was perfectly obvious, and was the only way to go. I doubt that Picasso spent a whole lot of time thinking about the compositional elements of his monumental, deeply haunting painting Guernica. All of these things were internal and unavoidable.

But let’s face it, nobody starts out like that. Einstein, Bach, Rembrandt, Jobs, and all the other greats of their respective fields achieved their status by knowing a great deal, observing a great deal, and putting a great deal of their insights into their work. Insight and intuition aren’t just there; they are products of observation, knowledge, and experience. You can’t be intuitive or insightful about anything you don’t know. You have to work to get yourself there.

I chose the several examples that start out this chapter because people like Einstein, Beethoven, and Jobs represent great insight, intuition, and creativity in science, art, and business. I do not believe the basic approach to intense creativity is different in any of those seemingly diverse fields. It always starts with a great deal of interest, a great deal of knowledge, and a few insights that others who were equally brilliant never saw. You don’t have to be as brilliant as any of them to connect a few dots in ways that nobody ever has before. And that’s often what creativity is: the simple act of putting together two or more well-known ideas in a way that nobody has ever put them together. The ideas were there, but nobody ever looked at them in relation to one another in that way. That’s creativity. But I doubt that it happens without a deep understanding and knowledge of the field. 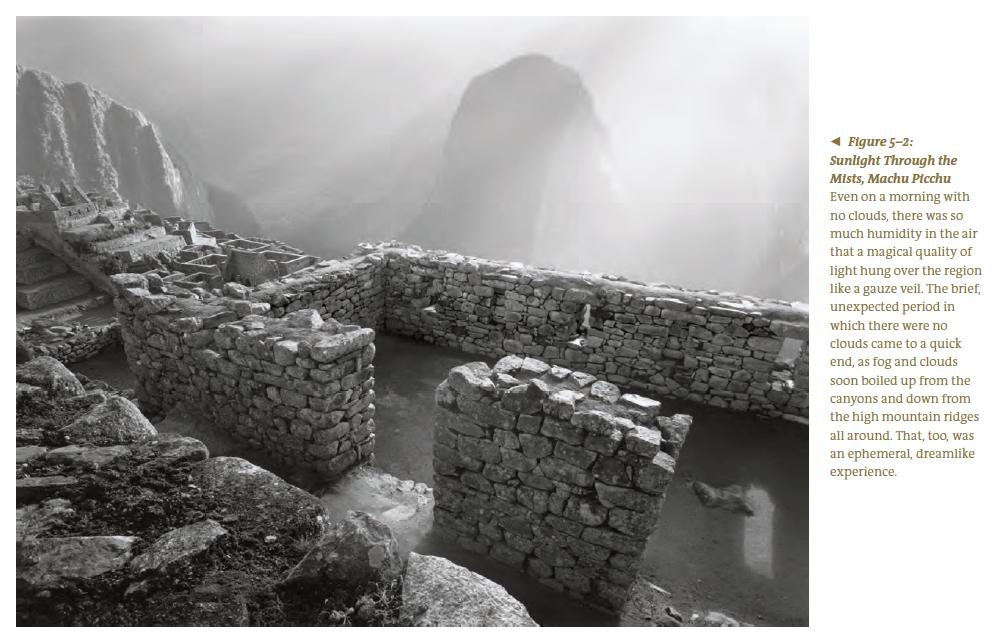 Just as most people place obstacles in front of themselves that prevent them from doing things they want to do, or claim they want to do, I have found people who have a great deal of knowledge and insight into things, but they never move forward because they’re afraid to apply their own well-founded intuition to the task at hand. They feel that intuition is silly and often wrong. It is unscientific. It is something to be overcome with any number of carefully considered measurements before proceeding.

Insight and intuition are attributes to be relied upon, not avoided. Small insights can lead to small breakthroughs, and sometimes even large breakthroughs. If or when you have a “feel” for something, it’s worth going for it.

Have you ever met people who display uncanny intuition about other people? They seem to know who is good, who is honest, who can be trusted, and who cannot be trusted. These are people who have simply observed and experienced human behavior for so long that they can see through the many veils we all hide behind. These intuitive folks are not considered geniuses like those listed at the beginning of the chapter, but they are as keenly observant as those listed above, and have parlayed those years of experience into valuable insights into other folks’ characteristics. But even this doesn’t come without work, even for those intuitive folks who never thought they put any work into it; they just internalized it all along the way. If you are already doing photography and reading this book, chances are you have already invested a good deal of time in your photography. Photography is important to you. You love doing it, and you are constantly striving for better results, not just to impress your friends or family, but primarily to satisfy yourself. I’d recommend that you start to use more of your intuition wherever you can, even where you have generally thought you couldn’t or shouldn’t.

Let me give you a couple of small examples from my workflow that may help free you up in terms of trusting your intuition. In the darkroom, when I am printing, I use a much more dilute developer than Kodak recommends. Kodak recommends Dektol diluted 2:1 with water. I dilute it 5:1, but I also develop for an extended time. Kodak recommends 1 1/2 to 2 minutes as standard developing time, and I develop for about 5 minutes. I never time it, I just do it. Students at workshops over the years simply don’t believe that I can tell when five minutes are up, so they first assume that I must be counting out the time. I point out that during my printing demonstrations, while I’m agitating the print in the developer, I talk to the students about what to look for in the developing image, what I’m doing, what I plan to do next if the image still isn’t satisfactory, or any of a number of other things. I can’t be counting out the time while I’m talking about other things.

So they turn to the next means of sleuthing out what I’m up to: they surreptitiously time the full development, obviously skeptical that I’m really developing for five minutes. Amazingly, they find that I’m within seconds of the stated five minutes. I know that I have a feel for that time, so I just do it. It’s intuitive. I tell students to loosen up and try it themselves rather than start a timer as the print goes into the developer. If it’s not intuitive at first, it probably will be in a short time. The benefit of my procedure is that I get repeatable results, so it’s not just a silly thing; it’s essential for the quality of the prints I produce. But I do it intuitively.

Another quick example: I don’t use a typical 1-degree spot meter to measure light levels in the field. I use a broader 7.5-degree semi-spot meter because it has greater sensitivity in lower light levels. I can intuitively see the range of brightness in a scene, so I don’t need to point the meter to the extreme shadows and highlights. I need the meter to determine the basic brightness level, but not the brightness range. I rely on that intuition, and I’m accurate.

Too many photographers feel they have to measure everything. They are scared to rely on even the smallest bits of intuition like these two examples. If you are too afraid to use your intuition for small things like this, you’ll never use it for anything bigger. In short, you won’t use it at all. That’s a loss that you’ve imposed on yourself. Therefore, only you can power past these impediments to using your intuition. Loosen up. Use your intuition wherever and whenever possible. It’s an extremely important tool.

This article is an excerpt from The Essence of Photography by Bruce Barnbaum.