Photograph What Moves You

An excerpt from Within The Frame, 10th Anniversary Edition by David duChemin

When vision is spoken of in photographic terms, it is not spoken of merely as the things you see but how you see them. Photography is a deeply subjective craft, and the camera, wielded well, tells the stories you want it to. It will tell the truths you want it to, and certainly the lies. You are central to your photography, and the camera is merely the tool of interpretation—not the other way around. The most compelling photographs you take begin with the things about which you are most interested, most passionate, and most curious. When those photographs are taken in a way that communicates your unique perspective, they translate into images that say something. They are more than a record of “I was here and saw this.” Instead, they become “I feel this way about this. I was in this place and saw it like this.” They are not acts of representation, or illustration, as much as they are acts of interpretation.

The photographs that move me to laughter, to tears, or to get on a plane and see something for myself are the ones where the photographer has done more than shoot with her eye; she shoots with her heart as well. This is more than just an artsy-fartsy effort to get in touch with your emotions. It’s about creating images that others will care about, and be engaged by. 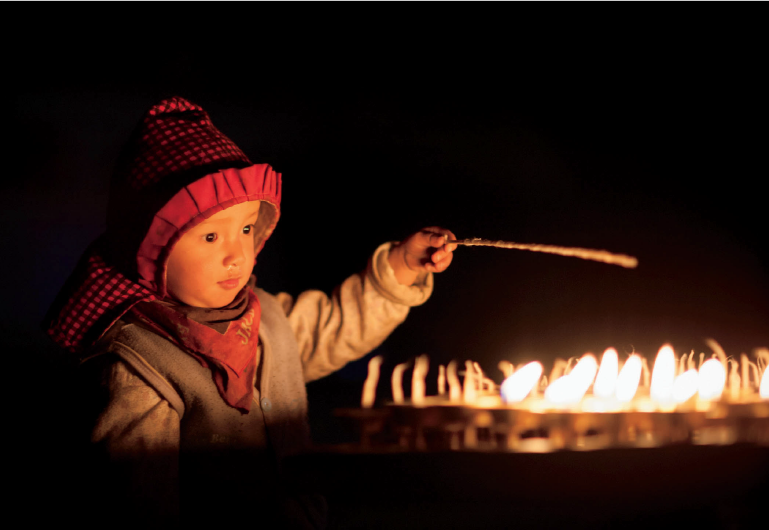 85mm, 1/100 @ f/1.2, ISO 800
Kathmandu, Nepal. The butter lamps around the stupa at Boudhanath throw out some beautiful light. Combined with the devotion for which they are lit, it’s hard not to be captivated—and glad you brought your fastest lens.

So it is my intention to shoot only that which moves me. That might mean an image of a mother with HIV/AIDS clinging to her son, or it might be the pattern of rocks on the shore, but it’s something that leaps at me and moves me to turn and say, “Hey, look at this!”

When I wander around a new city or village and finally stop trying to be clever with my photographs and just become aware of what is moving me, it is time and time again those photographs that not only continue to move me later but that move others. The clever shots, the ones I felt I should take, probably because I’d seen better photographers make those images—but that didn’t move me beyond anything more than some sense of obligation to duplicate similar shots I’ve seen elsewhere—have only ever failed. They come off as disingenuous, false efforts that don’t resonate.

Taking stock of the things you care about and are drawn to is an excellent ongoing exercise in recognizing and refining your vision. My list grows and changes, but always includes children, laughter, play, color, textures, simple graphic lines, irony, odd juxtapositions, interesting faces, the natural world, and expressions of faith. I don’t like photographing events. I find them chaotic, and it’s hard to take my time and order elements within the frame, so I generally avoid them or find a way within them to shoot what I love—the humanity and color of them. Knowing what you love to photograph, and what you do not, is the first step in the recognition and refinement of your vision. It’s this that makes our craft so diverse; you and I can stand on the same street corner and see it, and respond to it, in such different ways that I would later look at your images from the same moment and place and wonder aloud, “I didn’t even see that!”

Shooting from the heart and telling the visual stories you love and care about is the first step in making your viewers care. If we do not tell stories in a way that people care about, we’ve failed. We’ve failed to create an image that connects on some level, failed to pull the viewer into the frame and show them something new. This doesn’t mean we shoot only those things that others want to see. It means we shoot the things that move us in ways that will move others. From simple vacation images to shocking images of genocide, an image succeeds or fails based not only on the subject matter but on how that subject matter is expressed. If you think of it as a cinematic film, it is not only the story told but the way in which it is told. Love is one of the great themes, but there are plenty of lousy movies about love. 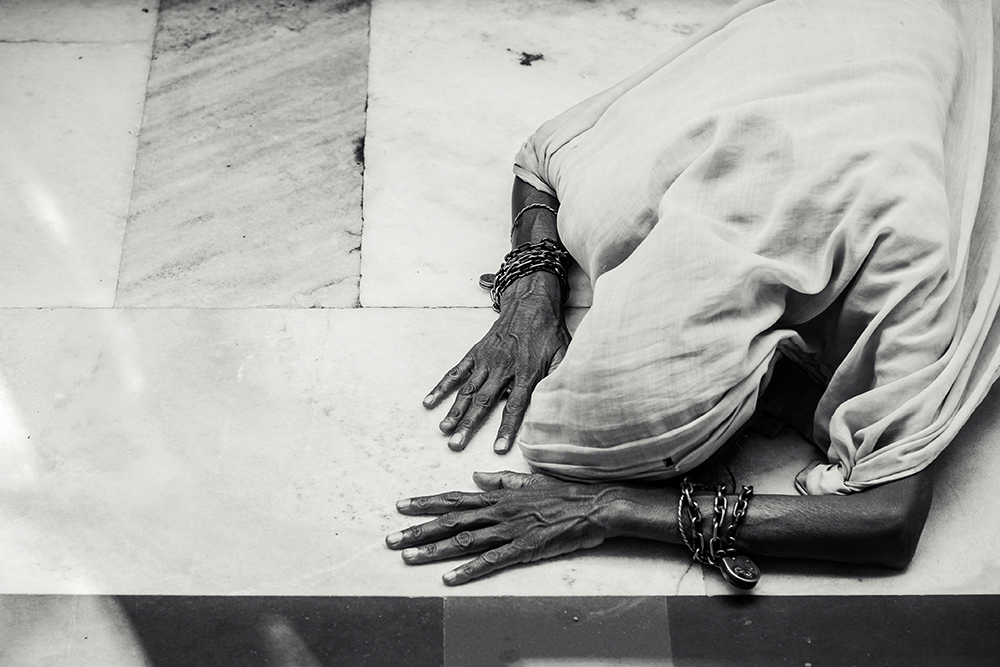 85mm, 1/125 @ f/5.6, ISO 100
Delhi, India. Nizamuddin shrine. A woman prostrates herself in prayer. Her shackles are symbols of promises to which she’s bound herself until the saints, or Allah, will answer.

The recognition of visual language (and the beginnings of visual literacy) allows you to tell your photographic stories with much greater clarity. Telling your stories with the most appropriate visual tools is simply better communication, and it gives your viewers a much better chance of being moved, informed, or inspired—whatever your hopes for that image are.

Think of this visual language as much the same as spoken language. Your mother tongue is composed of vocabulary, grammar, and syntax that allow you to speak, write, and be understood. Once you learn English, you are able to clearly communicate your thoughts and feelings to others. The more you master the tools—the broader your vocabulary and the more nuanced and creative your use of grammar—the more powerfully, subtly, or detailed that communication can be. It would be convenient to dismiss this, but it’s hard to disagree with the statement that the best poets, playwrights, songwriters, and authors have moved us deeply because they were able to skillfully use their language to tell the stories they were burning to tell.

So it is with the visual language of photography. It too has a vocabulary, a grammar, and syntax. The more intentionally you study these, the more powerfully you can communicate through light, lines, and moments. Remembering that communication is not only what you say but how you are heard, this shared visual language is our key. Like a child learning to speak, it allows us to move from babbling incoherently, to speaking simply but brokenly, to one day being able to clearly ask for that thing we want. We may already photograph the things about which we are passionate, but until we do so in a powerful way, using the visual language tools available to us, we’re only babbling passionately and not communicating.

Passionate stories told passionately: that’s the goal of my image making. I want to go to new places, see new faces, and discover new stories that I can share with the world in the clearest, most powerful way possible. So what are those elements of visual language? Well, that would be the subject of another book entirely, but I’ll touch on some of them. In short, it’s everything that is within the frame, and everything that gets it there. Light, lines, shades, contrasts, optics, apertures, shutter speeds, ISO, and the combination of these things, would make a short list.

Most of us have some photographers whose work we love and respect. For some of us, they’re long-dead masters; for others, they are contemporaries. Find a dozen photographs you love, pour some coffee, and study those photographs. Look at the lines, the light, the moments, and the geometry that ties it all together. If there are noticeable aesthetic effects—like slower shutter speeds that blur some of the action or shallow depth of field caused by a wider aperture—take note of those too. Then ask yourself what is it about those dozen images that made you care so much about them? Is it the light? The physical point of view of the photographer? The subject? The choice of moment? Would a change in lenses change the feeling of the image and make it lose its impact for you? What if it was in black and white? Would the loss of color change the mood for you? Knowing what connects with you visually and emotionally is the first step in understanding how to make your own photographs connect with others.