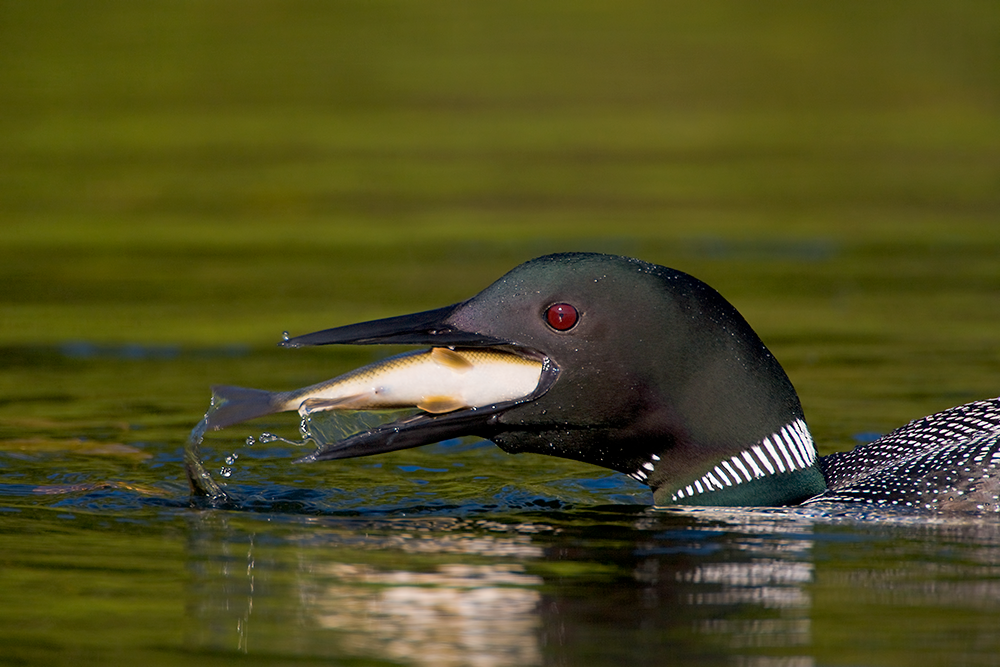 An excerpt from Mastering Bird Photography by Marie Read.

Increase your chances of success by be­ing well prepared before heading out into the field. Being prepared includes the following:

Your first priority should be to famil­iarize yourself completely with your camera and lens. Study the user guide with the camera in your hand. Learn the functions of all the buttons and dials, and scroll through the various menus and displays. Modern cameras have a daunting array of adjustable functions, and it is good to know all the options, even if you eventually use only a subset of them.

Birds’ activity levels, weather, and light conditions can quickly change, requiring you to efficiently adjust set­tings to match the situation. Know your camera’s physical layout so you can change settings simply by touch. Don’t forget the controls on the lens, too.

In particular, learn how to perform the following functions—we’ll be revis­iting them throughout the rest of the book:

Less vital, but still good to know, is how to access the camera’s Live View func­tion, which displays the scene on the camera’s rear LCD screen. In certain circumstances, it can be easier to frame and set exposure using Live View than through the viewfinder.

Finally, for the highest quality im­ages your camera is capable of produc­ing, always shoot in RAW format rather than JPEG. (Note that many cameras have the option to shoot both formats at once.) RAW capture provides the maximum amount of digital informa­tion and gives you the most control over how your images will ultimately appear. Furthermore RAW enables you to correct certain exposure errors such as occurred in figure 1.14. The original capture was overexposed, but since it was in RAW format, I was able to recover some detail in the blown-out white areas and sal­vage the image. (I’ll share my workflow for this example in chapter 14.) If it had been shot as a JPEG, the result would have been far less satisfactory. To learn more about the benefits of RAW capture, see the special section at the end of this chapter. 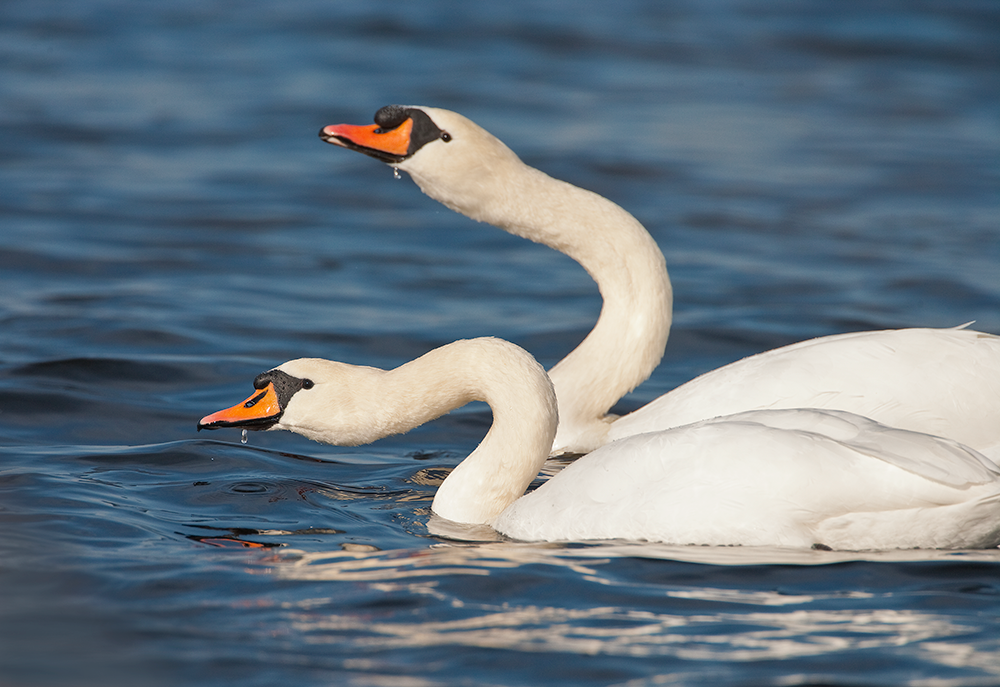 You probably already know the basic concepts of photography, but if you are new to photography, now is the time to make sure you fully understand these fundamentals before you head out in search of birds. Find a basic photography book or online course. For a quick over­view, see the special section at the end of this chapter.

One characteristic that top bird photog­raphers share, which is reflected in the quality of their work, is a deep knowl­edge of birds and their lives. I can’t stress too much that an understanding of birds will improve the quality of your images.

I’ve had a lifelong fascination with bird behavior, and I enjoy discovering what birds do by watching them myself, as well as by reading about them. I en­courage you to do the same. If you will be photographing an unfamiliar species, researching it ahead of time will give you an edge, for instance by alerting you to any unique attributes that might be meaningful to try to photograph. By capturing the uniqueness of a species, you are portraying its very essence.

Learn about bird biology in general and your goal species in particular—life history, habitat, preferred foods, behav­ior, and anything that makes the species special. For North American birds, a wealth of information is available on­line from such websites as Cornell Lab of Ornithology’s All About Birds (free) or Birds of North America (subscription based), as well as from books and from talking to biologists, birders, and other photographers. Perhaps the best way to get to know birds, though, is through observation: Be a bird watcher as much as you are a photographer.

In addition to species-specific in­formation, it helps to know your indi­vidual subjects. Monitor the day-to-day routines of the very individuals you’re hoping to photograph. Like humans, birds are creatures of habit—a Pileated Woodpecker visits a particularly reso­nant tree snag to perform territorial drumming, a Great Blue Heron can be found basking in the sun on the same log each morning, or a White-tailed Kite frequents a particular field to search for prey (figure 1.15). Based on predictable activities such as these, you can devise a photographic plan. 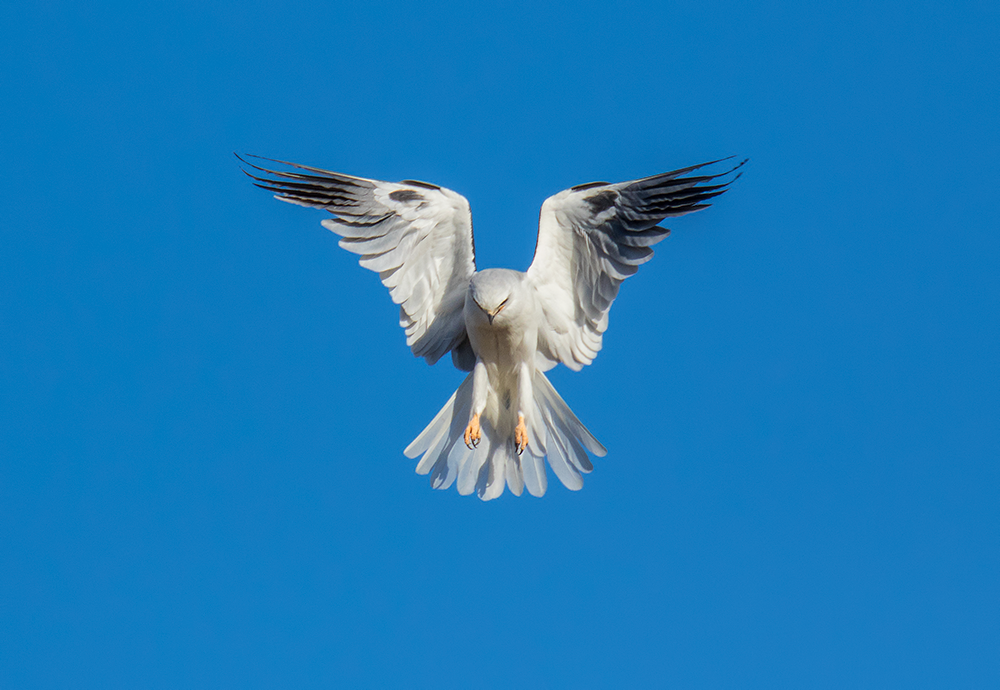 Sometimes I enjoy the freedom of wan­dering around with a lightweight cam­era combo and photographing whatever birds cross my path. I often do this when I’m scouting an area. But usually, my photo projects involve a certain amount of planning. That may be as simple as setting up a blind (see chapter 4) near a spot where I’ve noticed birds gathering regularly, and then being in place before they arrive. Or it may be complex and require critical timing, as did building a scaffolding tower to reach a Baltimore Oriole nest high in a tree (figure 1.16).

The first step was to evaluate the site, then rent and transport scaffolding. Next, I had to resort to bribery: secur­ing my husband’s help by promising to buy him a shiny, new extension ladder. We delayed building the tower until late in incubation to minimize the risk of nest abandonment. We prepared a stable base by laying down planks on the muddy ground, and then we put up one tier of scaffolding at a time over a period of a week. The parent orioles be­came completely used to our presence. Once they began feeding their young (figure 1.17), I climbed up onto the tower platform each morning for two weeks to photograph at nest level, until the young orioles fledged.

When developing a plan for your own projects, make plenty of observations, is to get advice from other photographers or biologists if needed, and then consider the site characteristics and any previous experience you may have had with the goal species. Be prepared to adapt the plan as necessary. 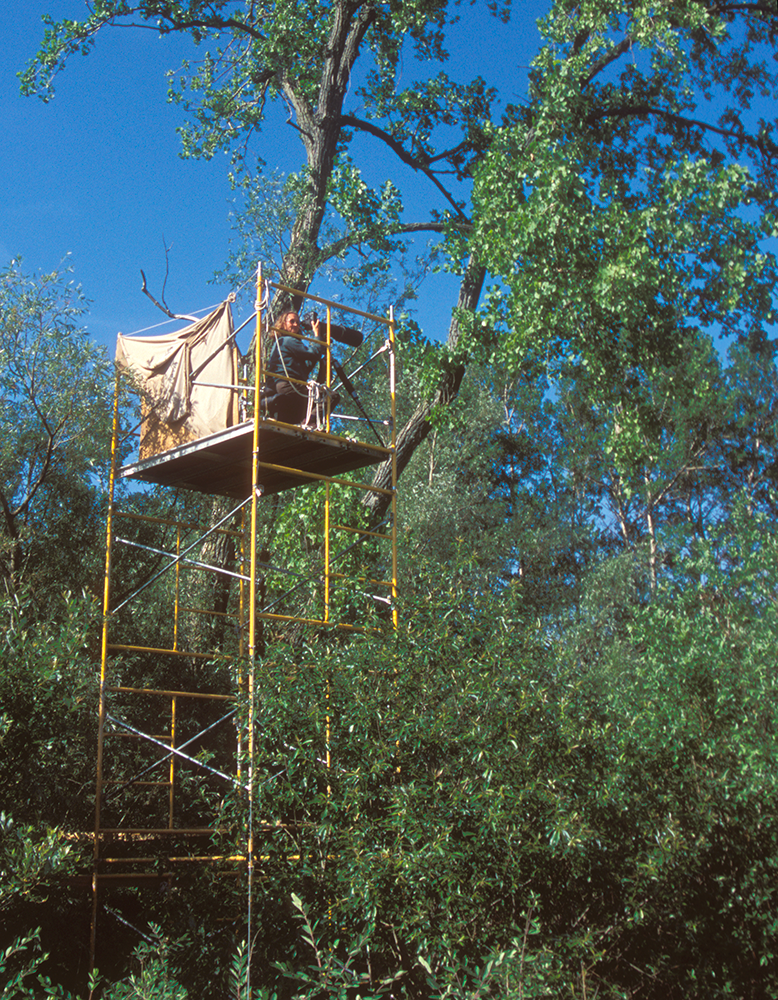 Be Prepared for Weather and Terrain

Being uncomfortable may distract you into missing an opportunity, so dress appropriately. For cold or wet conditions, it’s worth investing in high-quality win­ter wear, raingear, and waterproof foot­wear. Wear moisture-wicking clothing and a brimmed hat during hot weather. Consider protective gear too. Knee pads and long sleeves help prevent skin abra­sion, if you expect to get down and dirty to shoot. Wear hip boots or chest waders for sloshing around a marsh or wading through water.

Keep in mind that weather affects birds’ activities too. In windy weather, flocks of shorebirds and terns hunker down on the beach or shelter behind land­forms. A warm autumn day may change fruit-eating waxwings into flycatchers, swooping high into the sky in pursuit of aerial insects. A cool, drizzly summer day forces high-flying swallows down out of the sky to swoop low over fields and lakes in search of aerial insect prey grounded by the weather. The better you know the behavior of your species under various weather conditions, the better you can predict what types of im­ages might be possible. 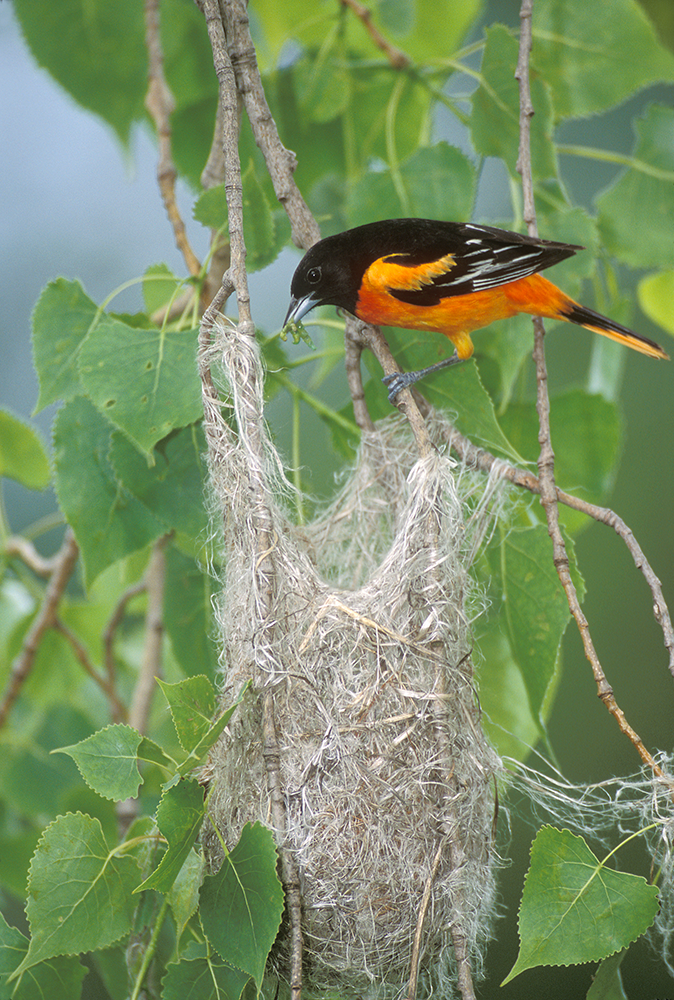 Be Prepared Mentally and Physically

Be prepared both mentally and physi­cally. Being observant, having good pow­ers of concentration, and being able to react quickly are learned skills that you should cultivate through practice.

Try this exercise: Find a bird that is keeping fairly still, for instance loaf­ing or preening, and observe it closely through your telephoto lens for two minutes without letting your attention wander. (Tip: You’ll find this easier and less tiring if your gear is on a tripod.) Train your reflexes by taking a shot each time the bird strikes a particularly el­egant pose or does something dramatic or quirky (figure 1.18). Notice how the lighting changes on the bird’s face with each tilt of its head and how compel­ling it is to have eye contact. Watch the changing juxtaposition of bill and feath­ers while it preens. Notice how changes in its posture and plumage (crest raised or lowered, for instance) signal whether it is relaxed or alert.

Next time, practice this for five min­utes, then ten, and keep increasing the time until good concentration and quick reactions become second nature. Soon you’ll be capturing some eye-catching shots. Observing birds closely is great fun plus it will improve your photogra­phy in numerous ways, including help­ing you anticipate action, something we’ll learn more about in chapter 8.

Finally, let’s consider strength. Cam­era gear can be heavy, especially to handhold. Serious bird photographers need to be physically strong and have stamina. It’s never too late to improve fitness and strength. To keep in shape, I regularly attend a fitness class that in­cludes weight training.

Engage all your senses and get tuned in to what’s going on around you. Pay attention to wind and light direction, notice the condition of the sky, and then use that information to determine where to position yourself for the best opportunities.

Be aware of what the birds are do­ing too, of course. Watch carefully and notice repeated, predictable behaviors. Capturing birds in action relies in large part on being able to anticipate behav­ior. Open your ears to birds’ vocaliza­tions, and try to determine the context in which they occur. Pay attention to alarm calls that may alert you that you’re too close to the subject.

Allow yourself time to explore your subject in depth and consider your op­tions for capturing it. Open your eyes to habitat elements or natural patterns that could form appealing compositions. Being open to possibilities is essential for developing that all-important “art­ist’s eye.”

While photographing Eared Grebes in Montana, I noticed they regularly swam through patches of pretty white flowers that were floating on the wa­ter’s surface. I moved to where I had a good view of the flowers and then spent several hours waiting for a grebe to ar­rive and form the perfect composition (figure 1.19).

Be aware for your own safety, too. Watch for slippery rocks, unstable cliff edges, hidden debris ready to trip you along an overgrown trail, or incoming tides that may flood your camera bag on the beach or, worse, cut off your return route to safety. Don’t get so engrossed in photography that you ignore danger signs. Once, while some companions and I were intent on photographing Atlantic Puffins from a high cliff top in Iceland, we suddenly heard heavy breathing behind us to find that we were about to be crowded off the cliffs by a herd of over-friendly Icelandic ponies! 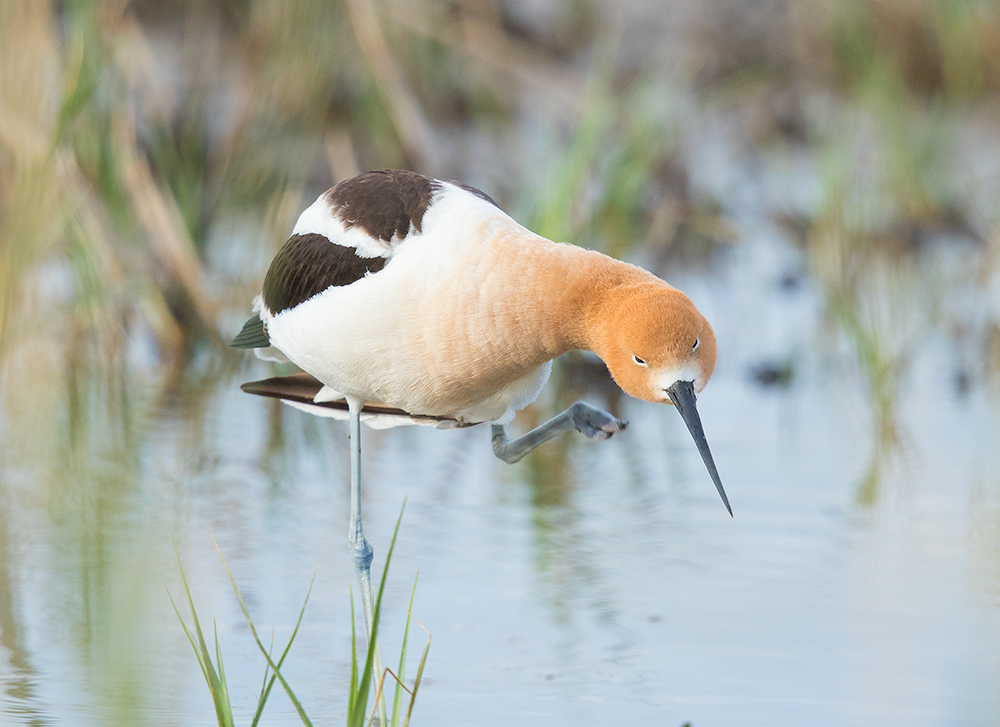 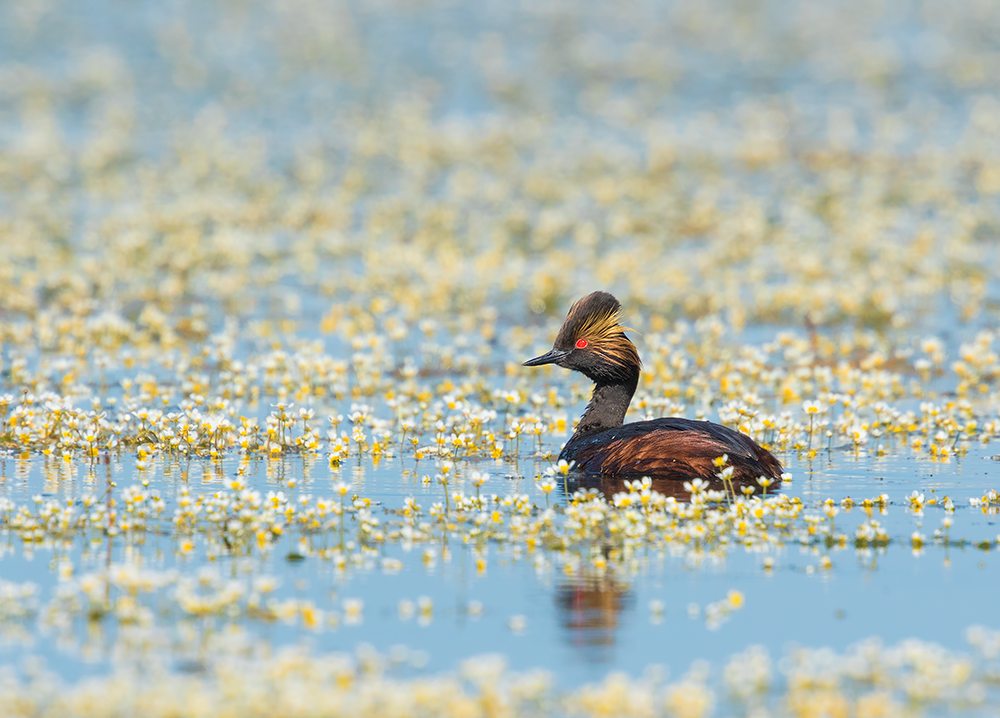 Be lucky? Easier said than done! But in fact, the more you shoot the luckier you’ll get. Time spent in the field—practicing photographic techniques, honing reflexes, and being persistent, observant, and open to opportunity—pays off, eventually. Armed with these skills, you’ll be primed to take advantage of the lucky opportunities Nature offers, and the result will be not simply a good shot but a great one.

I was once blessed with a fantastic opportunity while photographing Common Loons from a pontoon boat. The loons were so used to watercraft that they often swam under the boat in pursuit of fish. As luck would have it, a loon surfaced at very close range with an impressive fish and in perfect light (figure 1.20). Being aware and prepared factored into the picture as well. I’d no­ticed a telltale trail of bubbles appearing on the water’s surface indicating the loon’s approximate location underwater. By concentrating on them I was able to focus on the loon’s face the instant it broke the water’s surface and capture several images. Two gulps later the fish was gone!

Now that we’ve explored the various elements of field craft, you have a choice: Read the next sections to learn why to shoot in RAW and give yourself a refresher of basic photography concepts. Or, skip right to chapter 2 where we delve into the nitty-gritty of choosing camera gear.