David Busch’s Sony Alpha a6300/ILCE-6300 Guide to Digital Photography is now available! This highly anticipated guide is your ultimate roadmap to Sony’s advanced APS-C mirrorless camera. Scroll down to find a sneak peak at what this guide has to offer!

Phase detection points. The green squares in the figure represent the approximate

location of 425 phase detect points embedded in the a6300’s sensor (a matrix measuring 25 × 17). These pixels cover almost all of the frame. That can be important for sports photographers, who may have subjects in all parts of the image. As I write this, Sony has not released figures detailing the percentage of the frame covered by PDAF, but my quick-and-dirty calculations estimate that fully 81 percent of the frame can be used for phase detect AF. That’s outstanding. 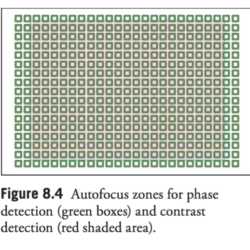 Contrast detection zone. The shaded red area represents the sensor area that contains the 169 separate contrast detection zones (they are not individual pixels). While the CDAF area is smaller than the PDAF coverage, approximately 73 percent of the frame is accounted for, concentrated in the center area.

The hybrid autofocus system of the a6300 uses both types of AF. The camera begins by rapidly focusing using PDAF, because the rangefinder approach always tells the camera whether to move focus closer or farther, and by approximately how much. No hunting is required, which is often the case with contrast detection, which needs to tweak the focus point until it settles on the sharpest position.

Once the PDAF has done its stuff, contrast detection kicks in, using its finicky but more accurate focusing capabilities to fine-tune focus. So, you end up with speedy initial focus (PDAF) and slightly slower final adjustments (CDAF), providing a perfect hybrid compromise. That’s why Sony didn’t switch to phase detection completely. Here’s a quick rundown of the advantages of a hybrid system: