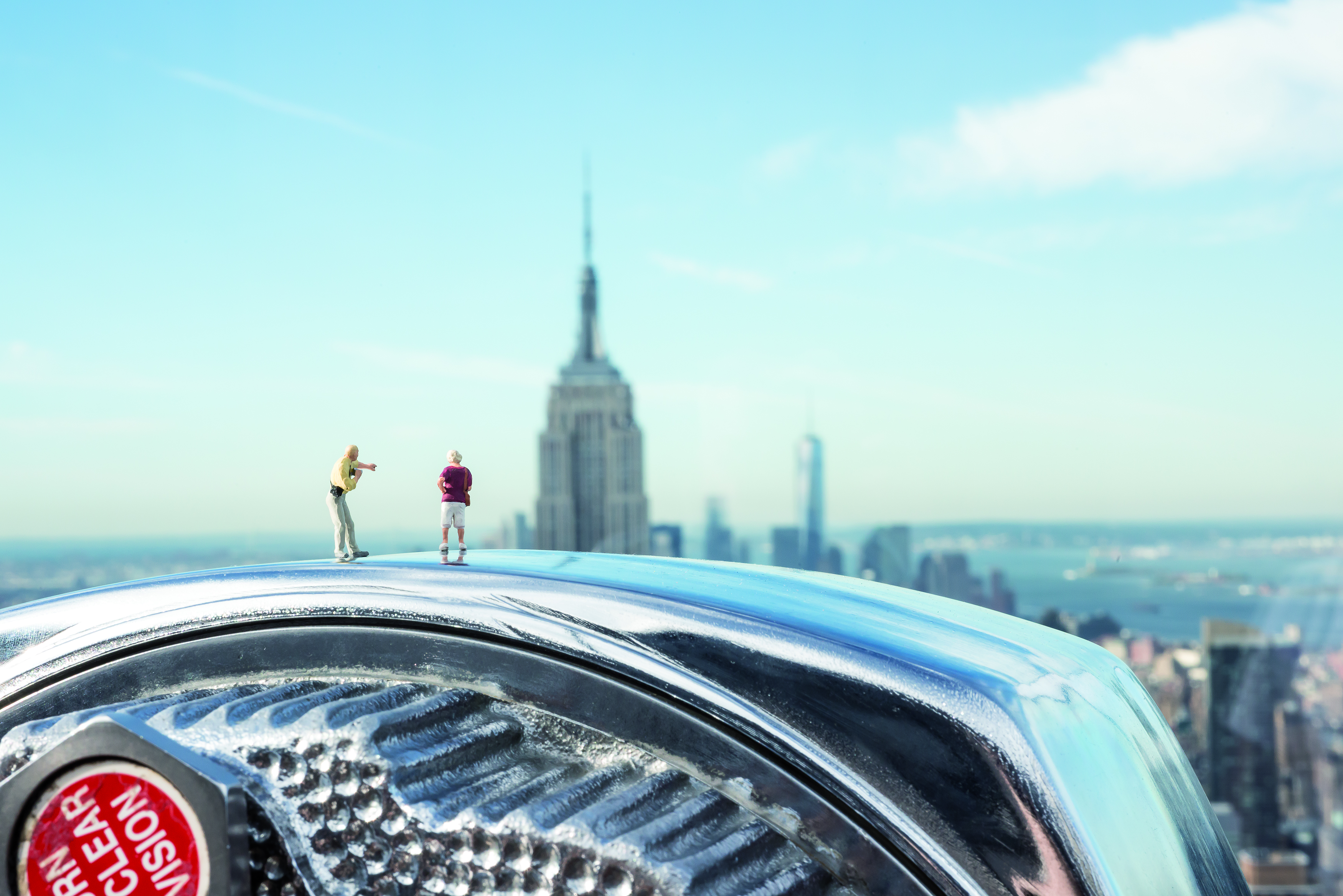 Bernd Schloemer first started taking pictures of miniature worlds many years ago at the request of a friend, who commissioned him to photograph installations of figurines before their sale. The first shoot involved figurines positioned in a box of hollowed-out bread rolls.

After one such shoot, a few figurines were left over, and Bernd decided to have a little fun by arranging them into a scene on the top of a desk, where he improvised a mini photo studio using a desk lamp for lighting. And so a project was born, first featuring images in and around Cologne, Germany, which is where the Colognies project got its name. It has since expanded worldwide. A favor for a friend blossomed into a full-fledged passion. Aside from having fun with his photography, Bernd hopes that his photographic ideas spur viewers to smile, and to think about his creations. In addition to his book and several calendars devoted to his art, you can find many other pictures on his website at www.colognies.de and on Facebook.

The photos of the Colognies project defy categorization to some extent. “Staged miniature street art” is perhaps the most accurate description. The main goal is to create pictures featuring figurines, which are about 20mm tall, in urban environments so that they convey a certain message. The content and purpose of these pictures ranges from comic scenes that aim to make viewers chuckle to more serious themes that cause viewers to reflect. The particular allure of this work is using the magnified perspective of a macro lens to make viewers conscious of commonplace objects such as a cigarette butt or an aluminum can. A nearly endless potential for creativity exists in staging small human figurines sharply in the foreground with objects (and sometimes real people) in the background cast in blur. 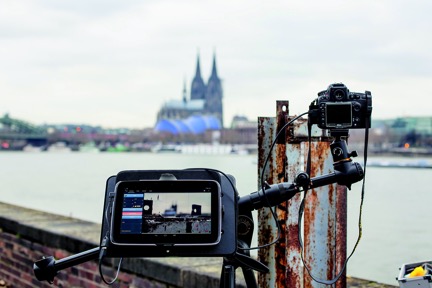 The figurines in my photos are commercially available, usually for professional and hobbyist modeling needs. They can be built and painted for any imaginable situation and they come in a variety of sizes, which further opens up creative possibilities for staging them in context with different backgrounds and found objects. For each shoot, I capture two perspectives: a close-up shot and an overview shot. For the macro image, which is more important to me, I use a macro lens with an intermediate focal length (60mm) and shoot from a variety of perspectives. I use a 24mm wide-angle lens to establish the overview perspective. Using a relatively short focal length with the macro lens has the added benefit that passersby tend to realize that you are shooting very close to your set, and they keep a respectful distance. Using a longer focal length would inevitably mean that more figurines would suffer tragic fates as a result of inattentive pedestrians. Other techniques common to the macro world, such as HDR and image stacking are not out of the question for my work. Ghosting issues are a concern, however, because many of my shots feature people moving in the background; I tend not to use these methods when that’s the case. 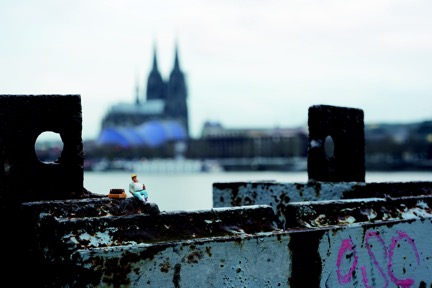 I usually position my camera at ground level to capture the macro image—in part because the angle of view is interesting but also because the figurines are so small. For some shots, every millimeter lower that I can get the camera counts. Lying on the ground and using the viewfinder or the live view mode on the camera is anything but comfortable in these situations, and after a rainfall it’s especially unpleasant. Rolling out a picnic blanket in a highly trafficked pedestrian area is also not practical, and is sure to garner some pitying stares from passersby. For me, the best solution is to use a tablet device with an application that enables me to remotely control the camera while inspecting the live view. A tablet’s screen is so much larger than the viewfinder or display on a camera, so it’s easier to evaluate sharpness and depth of field compared to using the depth of-field preview function on the camera itself. I can quickly and easily figure out what sorts of adjustments to make to the scene to get my desired result. 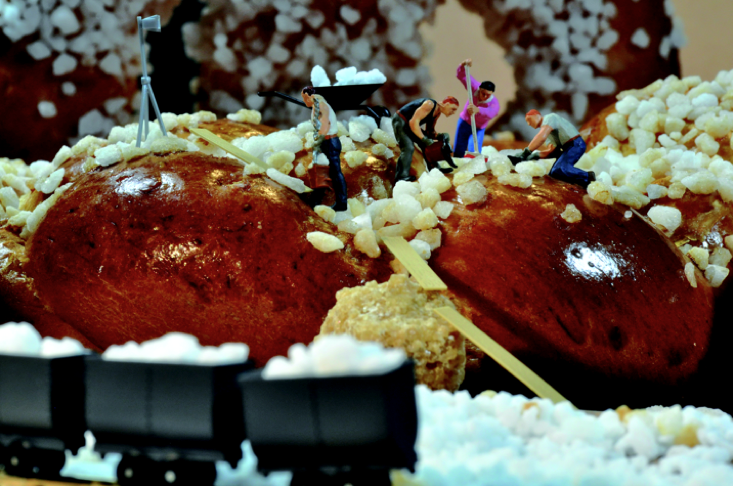 The purpose of the overview images is to show viewers the relationship of size between the subjects and their real-world surroundings. Depending on how and where my makeshift set is constructed, I try to use standard photographic techniques, such as HDR, as well as common compositional guidelines, such as the golden ratio, to realize the establishing shot. Circumstances sometimes dictate that using such photographic methods are impractical or impossible, however. It’s always a challenge for me to find places that allow for an interesting macro image, but also offer the potential for creating an engaging overview photo.

As a rule, I shoot all pictures in the RAW format so I can later use image-editing software to make modest adjustments to exposure and the like without losing image quality. I don’t generally edit anything more than tweaking the exposure minimally or possibly removing a fleck of dust from the subject.

Most photographers work with a certain standard of quality in mind, and most are never entirely satisfied with their results—I’m no different. Aside from producing technically sound images, I also make it a point of pride to come up with photographic ideas that charm viewers and spark positive associations with my images. I typically generate my best ideas when engaged in routine everyday activities as opposed to when I’m intensely thinking about what might make an interesting picture. Once I settle on a general concept, I set about finding or crafting the figurines necessary for the scene. Then it’s a matter of finding a suitable location. Lighting is a key variable that often influences where and at what time of day I shoot, because generally I rely on ambient light for my work. With any luck, these steps will produce the result I intended.

As is the case with life, however, spontaneity often offers better rewards than the most deliberate and careful of planning. I usually carry a handful of figurines in my equipment bag to position and photograph when I happen upon a potential scene. It never fails that some of these pictures end up being my favorites, while the carefully planned ones end up as rejects. 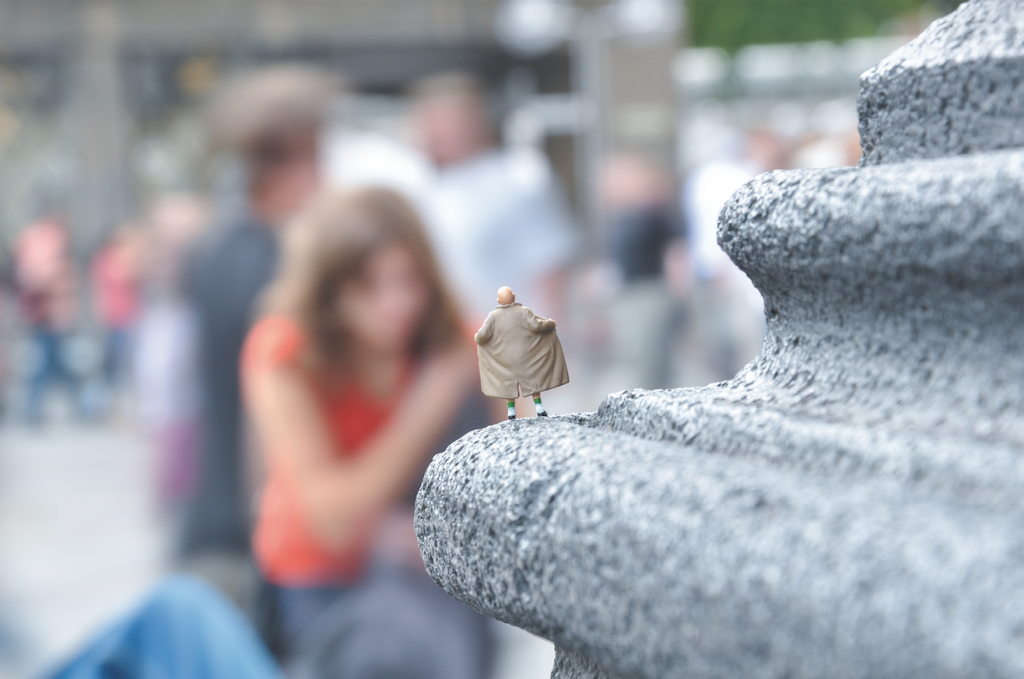 Time and again interesting interactions and situations arise while I’m shooting because passersby fail to notice the tiny subjects that I work with at first glance. Comments such as, “Hey, look, now they’re even taking pictures of trash on the street!” come up frequently. I also have the chance to witness herd instincts in action—especially when I’m working at landmarks and monuments. These locations often feature interesting surface materials such as old stone slabs that I frequently try to use. No one pays me or the landmark any mind while my mini scene is staged, as long as my camera stays out of view. But as soon as I pull my camera out, people tend to stop and wonder what’s going on. The onlookers, many of whom are probably not local, will eventually reach for their camera or phone and start snapping pictures of their own, assuming: “Well, if someone else is using that equipment to take pictures of this landmark, there must be something to it, and I should, too.”

Like this? Learn more Macro Photography Tips from The Complete Guide to Macro and Close-up Photography–Available now!