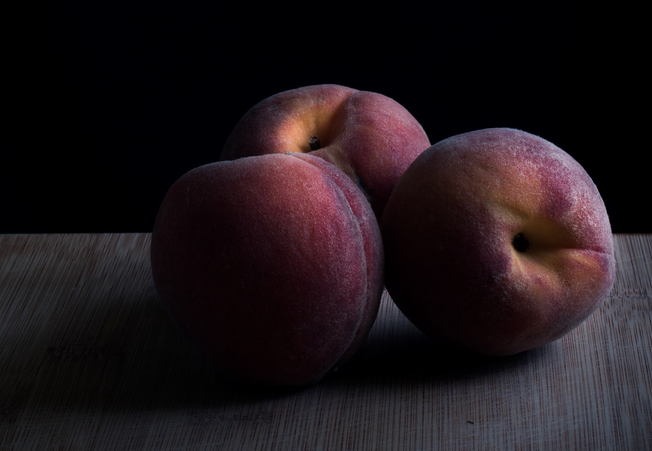 The team here at Rocky Nook just went to press with the follow-up to Tilo Gockel’s successful Creative Flash Photography book. This one is called One Flash! Great Photography with Just One Light.

The title pretty much says it all. The book includes a quick and to-the-point primer on flash photography, including coverage of equipment and techniques. Then Tilo dives in to 26 workshops, covering his approach to each shot, lighting equipment, setup, camera and equipment settings, post-processing, and other tips and tricks for a variety of subject matter, from portraits to products to food. Interested in a straightforward portrait? Check! Interested in a food shot for your blog? Check! Interested in stroboscopic techniques to show a subject in motion? Check! Interested in combining flash with ambient light? Check! And much, much more. 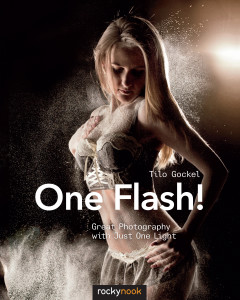 It’s a great book if you are a photographer interested in the world of flash photography or if, like many, you’ve been interested in flash in the past but gotten frustrated by it, then buried the flash at the bottom of the closet in a fit of rage and tears. I have a friend who has had that exact experience. 🙂

In fact, I decided to put two of Tilo’s workshops to the test myself. At home, we had a few peaches that were quickly moving beyond “peak ripeness,” so I decided to do two things: 1. Make ice cream with them, and 2. Shoot the peaches in both states, serving as a kind of before and after for them.

For the first shot of the peaches, I chose to shoot them following Tilo’s “Mystic Light” workshop, where you employ your flash as a light-painting tool. Essentially, you set up in a dark room, and instead of using a large modifier (such as a softbox) along with strategically placed flags to create soft, delicate, and carefully placed lighting, you use a small flash and, combined with multiple firings of the flash, physically move the light around your subject. In so doing, you transform your small flash into a larger and more malleable light source. It takes a bit of experimentation, but it’s a fun way to create a more subdued kind of food shot.

Here is Tilo’s behind-the-scenes shot of his image in the making: 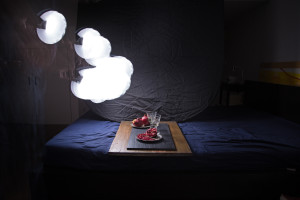 And here is his final image: 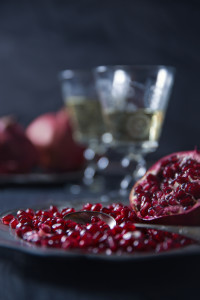 Here is my modest attempt with the peaches: 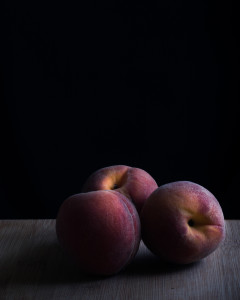 Fast forward a day, and the peaches have been transformed into some tasty ice cream. To give the feeling of enjoying ice cream on a warm summer day, it made sense to me to try for a brighter, “happier” image than the previous shot of the peaches. So I turned to Workshop #20, “A Simple, Classic Food Shot.” In this workshop, Tilo emphasizes the importance of backlight in food shots like this, then dives in to describe how he lit a plate of sushi in a restaurant with a makeshift setup. Basically, he placed a speedlight such that it provided a main backlight, fired it through a piece of paper to diffuse the light a bit, then filled in the light from the opposite side of the speedlight with another piece of paper. Basic approach, and very effective.

Here is his lighting diagram for the shot: 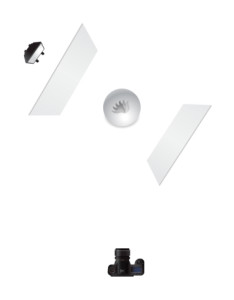 And here is his final image:

This time, I remembered to shoot a setup shot in my kitchen. I admit I “cheated” just a bit—I used a small diffuser on the flash instead of a piece of paper, but I would argue that it accomplished the same thing, as the diffuser was just about the size of a piece of paper. I did use a plain old piece of printer paper on the opposite side of the flash to provide fill light.

Here’s my setup (using apricots instead of the fast-melting ice cream): 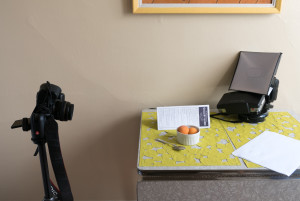 And here’s the final shot of the ice cream: 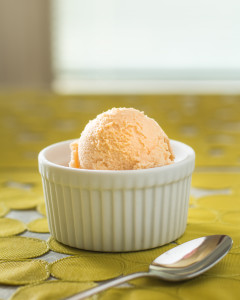 It was a lot of fun to shoot these images, and it was a great exercise to put some of Tilo’s One Flash! workshops through their paces! I’m now deciding which ones to try next.

The book releases this fall. Until then, you can check out Tilo’s previous flash photography book, Creative Flash Photography.